The 2013 excavations at Alken Wetlands lasted from July 15th to September 20th. The weather was fine without being too hot. Once the preliminary preparations such as the establishment of offices and staff facilities, the building of a bridge across the channel, water pumps and electricity were in place, the excavations continued from where we had left off the previous year. Part of the 2012 excavation area was re-dug in order to provide us with a workplace from which we could open new areas for investigation.

The main trench measuring some 181 m2 revealed a further 285 human bones bringing the total of human remains found at Alken Wetlands to 1708. The overall picture remained much the same, that is that most of the bones were found scattered as dismembered remains although a few leg and arm bones were found in a context that suggested that the limbs were whole when deposited in the lake. 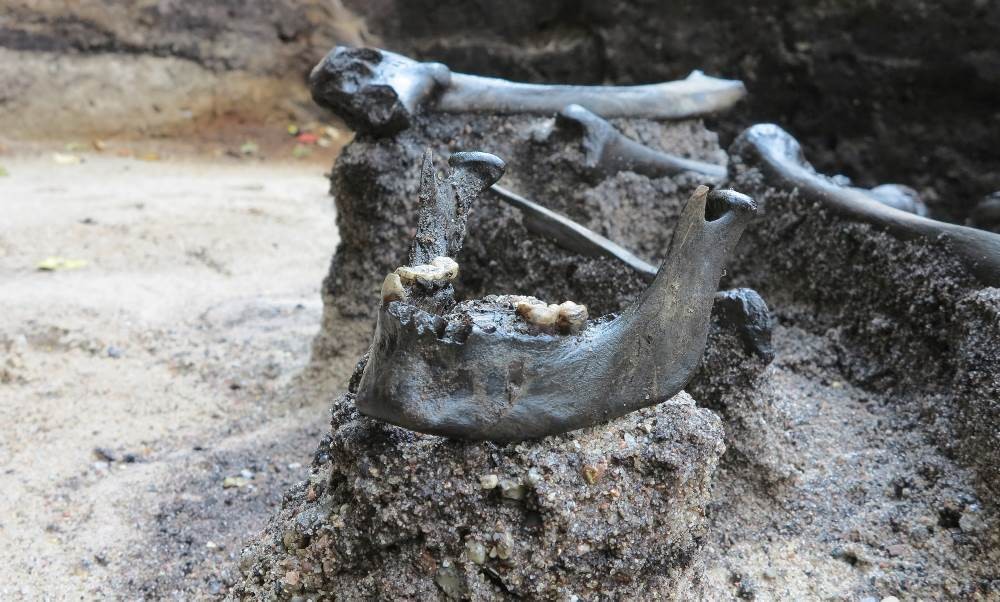 An area of the excavation took place behind the land spit which once separated the basin of Alken Wetlands from Lake Mossø.  Surprisingly bones from the votive sacrifice were found at quite a high level. Due to the fact that they lay so close to the surface meant that they were severely eroded and probably cannot be salvaged. No one had expected to find human remains so close to the present surface. 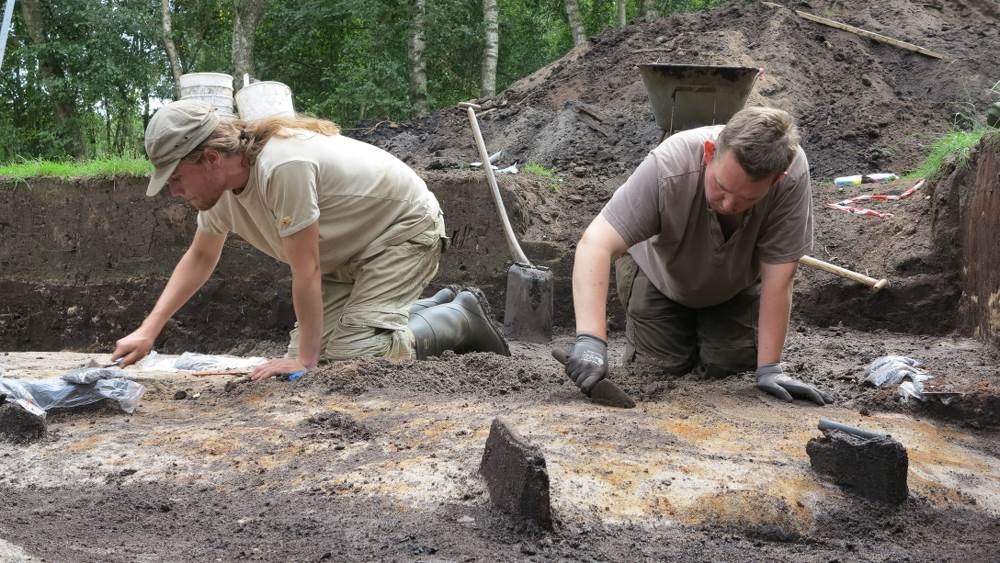 Relatively high lying bones on the back of the spit.

Once again a few weapons were found. Two large iron knives, the one with remains of it's wooden handle as well as the tip of a blade from a single edged iron sword and numerous fragments of wooden shields.

The tip af a one edged sword blade.

Other finds include a wooden spade, the handle of which had been shortened so that the object rather resembled a club with a large flattened head.

Wooden spade reshaped as a club.

A somewhat strange piece of wood resembling a boomerang, though right-angled. Traces of lashing can be seen on the objekt. 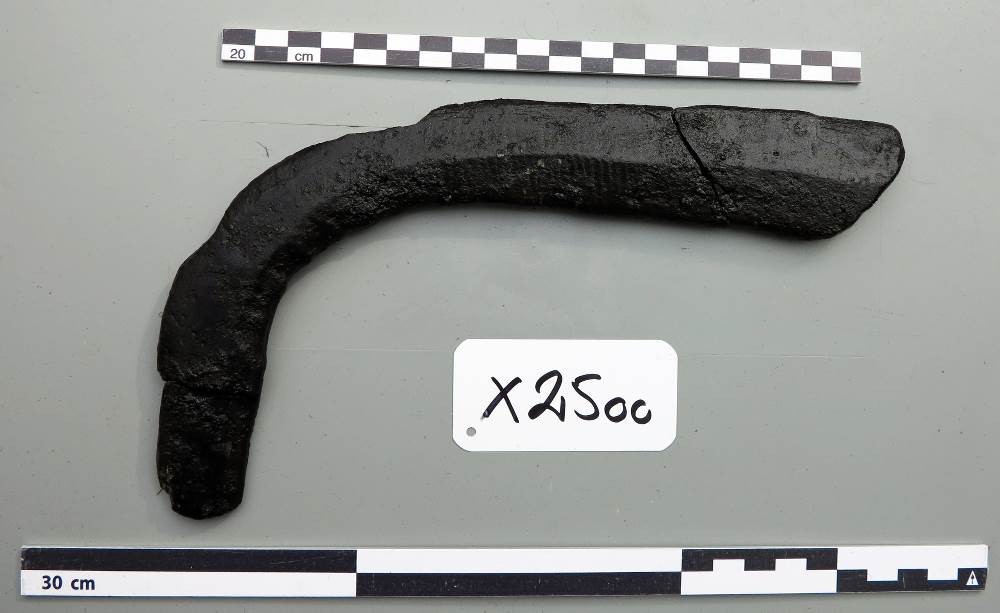 From our previous excavations we had formed the theory that many of the massive oak timbers found, may have belonged to a bridge-like construction. This was finally confirmed in 2013 with a well-documented bridge trajectory running through our trench. A dendrochronology dating indicates that the bridge dates from late 400 B.C although some of the timber dates from 200 B.C and may belong to an earlier phase.

Traces of a water mill

A single piece of worked timber specially aroused our interest. Since we had previously found remains of wooden wagons, we supposed that the find belonged in the same category. However our attention was drawn to the fact, that the find in question very closely resembled a unique and specific piece of timber characteristic of the earliest found water mills in Denmark, dating from the Viking Age/Early Medieval period. Our find had very close parallels to a piece of timber found at Løvenå, Ljørring close to Aulum, jutland, Denmark in 1953.  Excavations at Ljørring revealed a well preserved wooden trough for a mill wheel. In order to stabilize and hold the trough in position, distinctive wooden objects were attached over and beneath each end. In two square chiselled holes a rectangular worked piece of wood had been hammered down into the ground in order to stabilize the cross pieces. Some of these cross pieces were hewn flat on both sides others are made of a piece of cloven timber with one side flat and the other naturally rounded.

One of the slanted struts supporting a pair of the bearing bridge pillars.

Timber piece from a water mill as found in the gytja.

Excavations in the northern part of Alken Wetlands was carried out thanks to a grant by the the Agency for Culture and Palaces. At this place Harald Andersen had also excavated in 1959-60 and found a certain amount of human bones in small concentrations. The bones lay some 80 cm’s under the top soil and were in a state of deterioration, as they were no longer beneath the water level all year round. In 2012, in another area of the wetlands, a local landowner had found a humerus at a site where his tractor had got stuck. 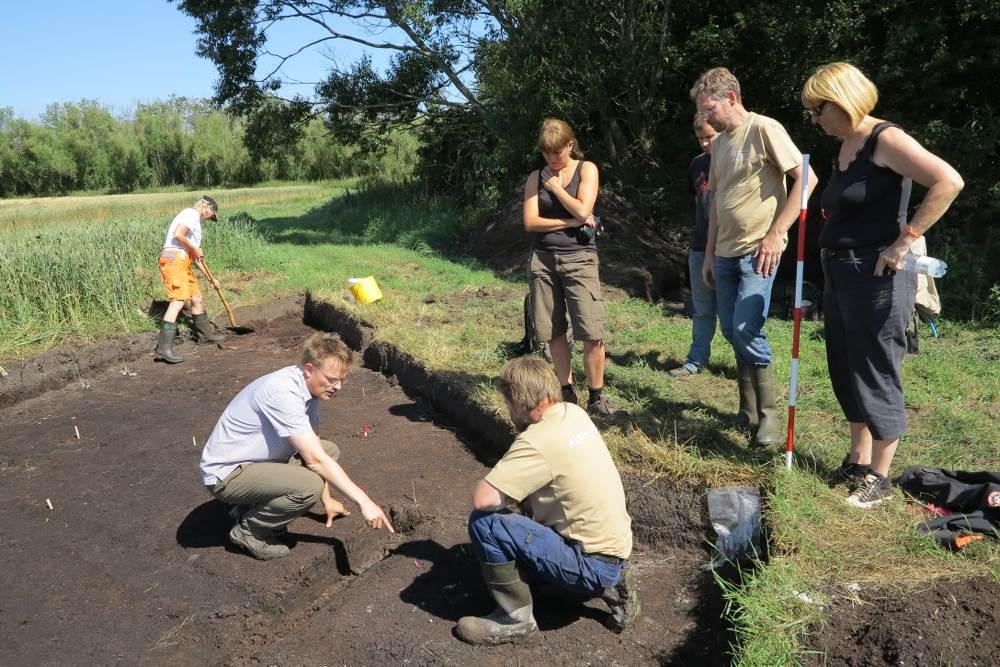 Members of the organisation group inspects the excavation.

We dug a number of minor trial trenches and an area adjacent to the 1959-60 excavation in the hope of finding more human remains. Unfortunately there were no longer any preserved bones in this part of the wetland.

We also placed trial trenches in the area where the humerus had been found. Unfortunately the result was as above. No human bones were found beyond a single bone that might have been mixed up in connection with previous drainage. Since the 1800 hundreds and especially in 1956 massive drainage work at the wetlands was carried out and this has had a signicificant effect on lowering the water level, consequently causing the decomposition of skeletal remains.