With the collection of data concerning older discoveries and the digitisation of old excavation plans finalised, we were ready to get into the field. Unfortunately, the vast majority of fix-points at Alken Wetlands had disappeared so the next step was to locate Harold Andersen's old excavation site. Further archaeological investigation was therefore planned out according to the known excavation sites from 1957 to 1960.
With kind permission from landowners, Evald Jensen and Peter Jacobsen Røhrmann, it became possible to conduct new archaeological surveys on their land. Furthermore, we want to thank Hans Hogrebe Esben Hansen and Lars Carstensen for providing access to the surveyed areas.

In the summer of 2008, Skanderborg Museum conducted a survey aiming to rediscover Harald Andersen’s main excavation site from 1957-1960. Aided by Peter Jensen, from Aarhus University's Department of Prehistoric Archaeology, the area’s proposed location was allocated and two minor test pits were excavated. The test pits were placed at the edge of the old excavation site and were extended until the edge of the old site was found. In one of the pits approx. 1 meter of a previous registered profile was recognised and in a second pit a corner of the old site was located. This allowed the site and Harold Andersen's measurement system to be geo-referenced.
Another purpose was to look at conditions for the preservation of human bones. Since Harald Andersen's survey, there had been a cultivation of the meadow and the drainage resulted in a severe merging of the organic layer between ½ and 1 meter. Therefore, it was a great concern that the preservation conditions for bones had degraded strongly or even worse, that there was no bone material left in the meadow. During the investigation it became clear that the bottom meter was still below the groundwater table and that the bones were preserved in this very oxygen-poor environment. A 1x1m2 test pit was dug to examine the conditions and it yielded two sacrum, a femur, an upper arm bone, a rib and a finger bone. The state of preservation of the bones was found to be extremely good in this part of the Alken Enge lake. Two C-14 datings were performed on the new bone material which confirmed the dating to be around the birth of Christ. 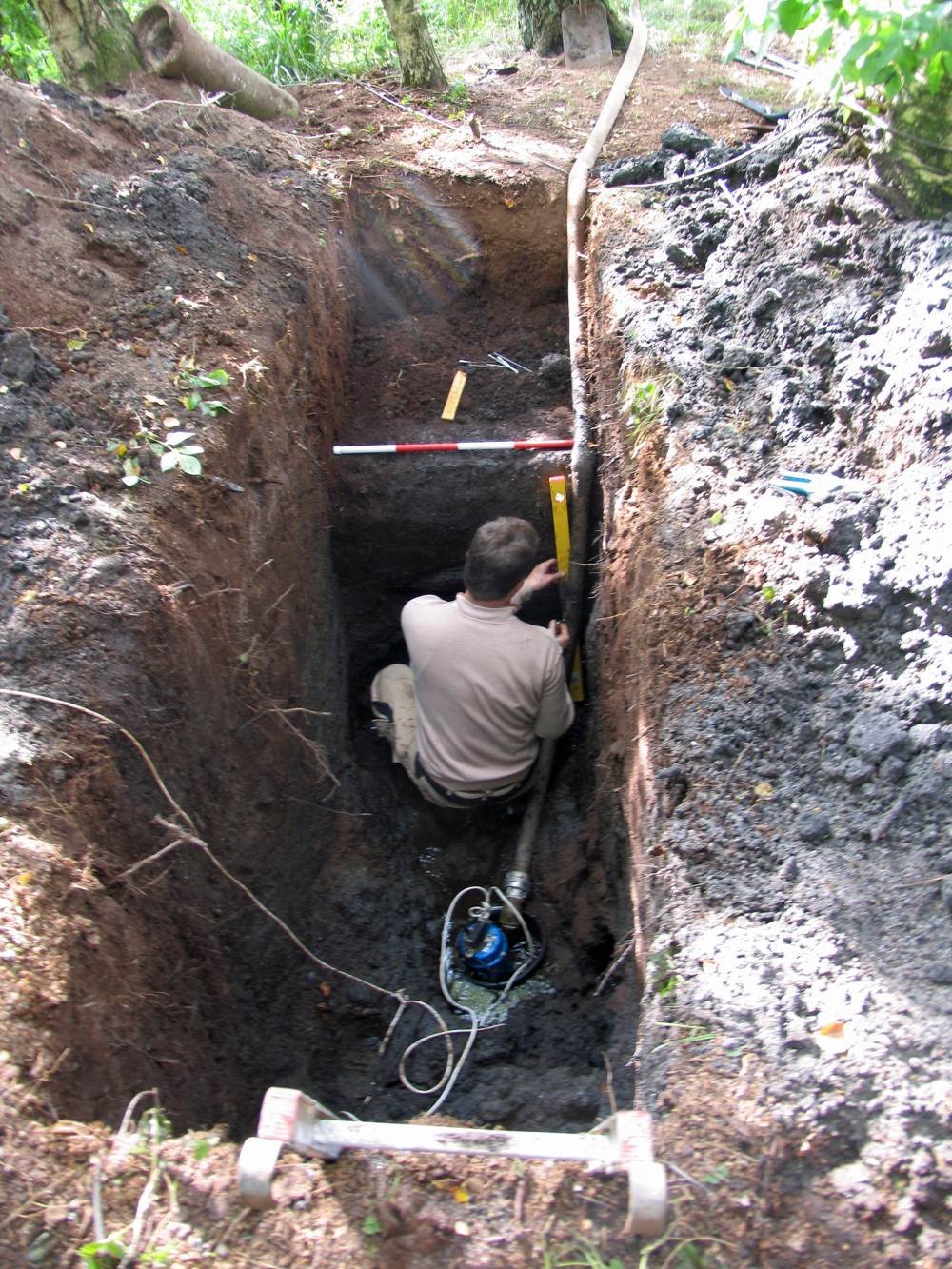 In the spring of 2009 we established a cooperative project with the Department of Prehistoric Archaeology at Aarhus University. A survey was planned, that doubled up as a training excavation for a team of students from Classical Archaeology. Using one of Harald Andersen’s major excavation sites, a test area of 3x6m confirmed the good preservation conditions; 98 pieces of human bones were found in 8 m2. As an added bonus, the Geology Department at Aarhus University examined the deposition conditions in the bog. It turned out that the then lake had been gradually filled with peat layers consisting of organic matter and erosion material, mainly from the Illerup river. Apparently the peat layers are chronologically deposited which therefore creates a timeline for the discoveries that are found in each layer. The archaeological investigation was supported by Queen Margrethe II's Archaeological Foundation. 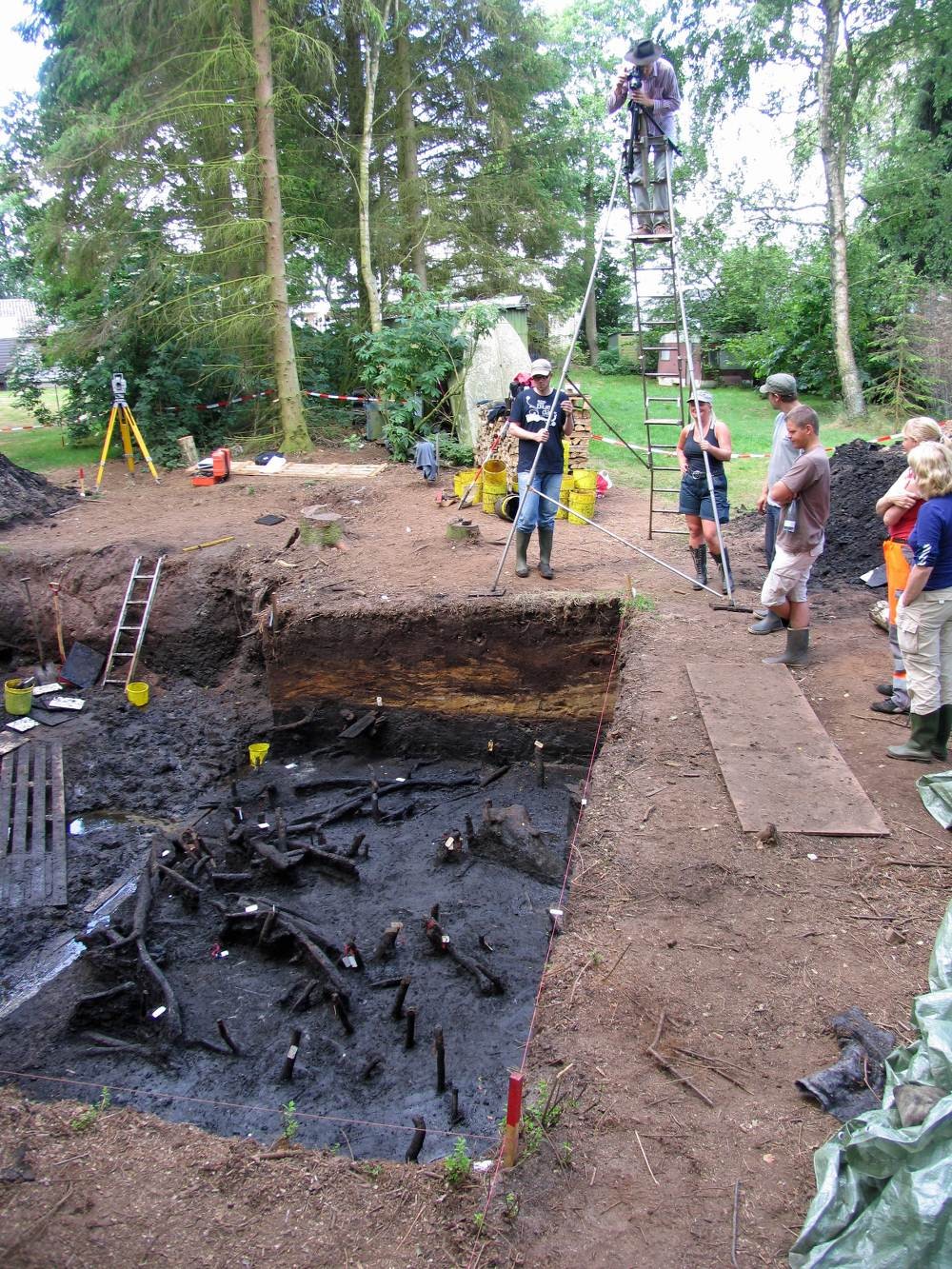