Over the years, human skeletal remains have been unearthed on several occasions at the Alken Enge location where the Illerup River runs out into Lake Mossø by Vædebro. The discovery of human skeletal remains at Vædebro has occurred on two separate occasions. Museum Skanderborg has a large collection of human bones from 1944-45 discovered in connection with the digging of ditches. In 1956, the canal by Vædebro was relocated and a larger amount of bones was discovered. Through word-of-mouth, we know human bones often appear in different parts of Alken Wetlands. One of the stranger pieces of information concerns the discovery of 50-70 craniums in the corner of one of the larger peat-pits.

Archaeologist Harald Andersen conducted excavations at Alken Wetlands from 1957 to 1960. The excavations concentrated on the canal that was dug in 1956. The site was named after the crossing point, Vædebro. Furthermore, he conducted archaeological surveying in the hinterland of Alken Wetlands. Early in the excavations it became clear that in the Iron Age there had been a lake in the area. In the top, sandy peat-layer, just above the sandy/gravelly lake bed, human skeletal remains were discovered. The bones were not in any anatomical order, but were instead, discovered as scattered single bones. It was almost exclusively the larger bones of the body; shoulder blades, pelvis and craniums/cranium fragments that were discovered. Only a few bones from the hands, feet, ribs and spine were also discovered. The reason for this particular accumulation has not been established. One theory was that intact individuals were sacrificed in the Iron Age lake. These then decomposed, and the bones ended up being spread by the wind, currents and waves more or less randomly around the lake. However, it was quite clear that the discovery involved skeletal remains from younger adult males. On some of the bones, damage from melee weapons could be seen. Harald Andersen’s conclusion was that these were sacrificed individuals from a defeated army. Some years later C-14 datings were conducted on several human bones, discovering that they were all dated to the time around the birth of Christ. It would obviously be fantastic if this dating fitted in with the dating on weapons deposited further up the river valley. However, the oldest weapons deposit is from approx. 200 AD, and therefore there can be no direct temporal correlation between any weapons deposits and human sacrifices. 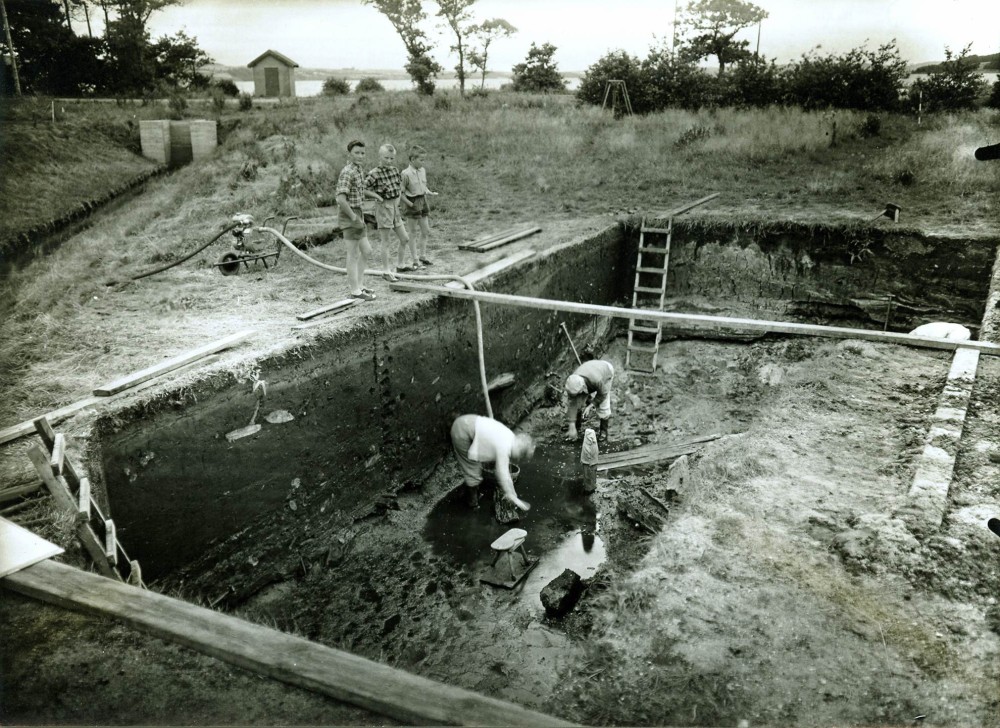 Since 2005, Skanderborg Museum has been collecting data about the finds from the Alken Wetlands. An overview of findings and archaeological locations in Alken Wetlands has been drafted. Data from Harald Andersen’s excavations has been digitised. The human skeletal material, which over time has been deposited at the Panum Institute, has been re-examined. Furthermore, a smaller collection of bones at Skanderborg Museum has been analysed. Thus, all the skeletal material from Alken Wetlands has now been anthropologically analysed. The results are surprising and needs to be confirmed through further studies.

The landscape surrounding the Illerup Valley and beyond into the Lake Mossø area is crucial for the existence and preservation conditions of the sacrificed army in Alken Wetlands. It is assumed that Alken Wetlands was originally a part of Lake Mossø. A form of landscape threshold may at one point, have cut off the lake section of Alken Wetlands from the rest of Lake Mossø. The sacrifice of the army must have happened a relatively short time after the lake had been gradually filled with peat. From this point onwards the water in the Alken Wetlands is considered stagnant. The peat layers grew, due primarily to a very strong supply of organic material and geological sediments from the Illerup River. The peat-layers have been growing as long as there has been a lake in Alken Wetlands.The relatively slow