Check this page as press releases will be published here during the course of the excavation.

Violent aftermath for the warriors at Alken Enge

Four pelvic bones on a staff and bundles of desecrated bones testify to the ritual violence perpetrated on the corpses of the many warriors who fell in a major battle close to the Danish town of Skanderborg around the time Christ was born.

Denmark attracted international attention in 2012 when archaeological excavations revealed the bones of an entire army, whose warriors had been thrown into the bogs near the Alken Enge wetlands in East Jutland after losing a major engagement in the era around the birth of Christ. Work has continued in the area since then and archaeologists and experts from Aarhus University, Museum Skanderborg and Moesgaard Museum have now made sensational new findings.

“We have found a wooden stick bearing the pelvic bones of four different men. In addition, we have unearthed bundles of bones, bones bearing marks of cutting and scraping, and crushed skulls. Our studies reveal that a violent sequel took place after the fallen warriors had lain on the battlefield for around six months,” relates Project Manager Mads Kähler Holst from Aarhus University. 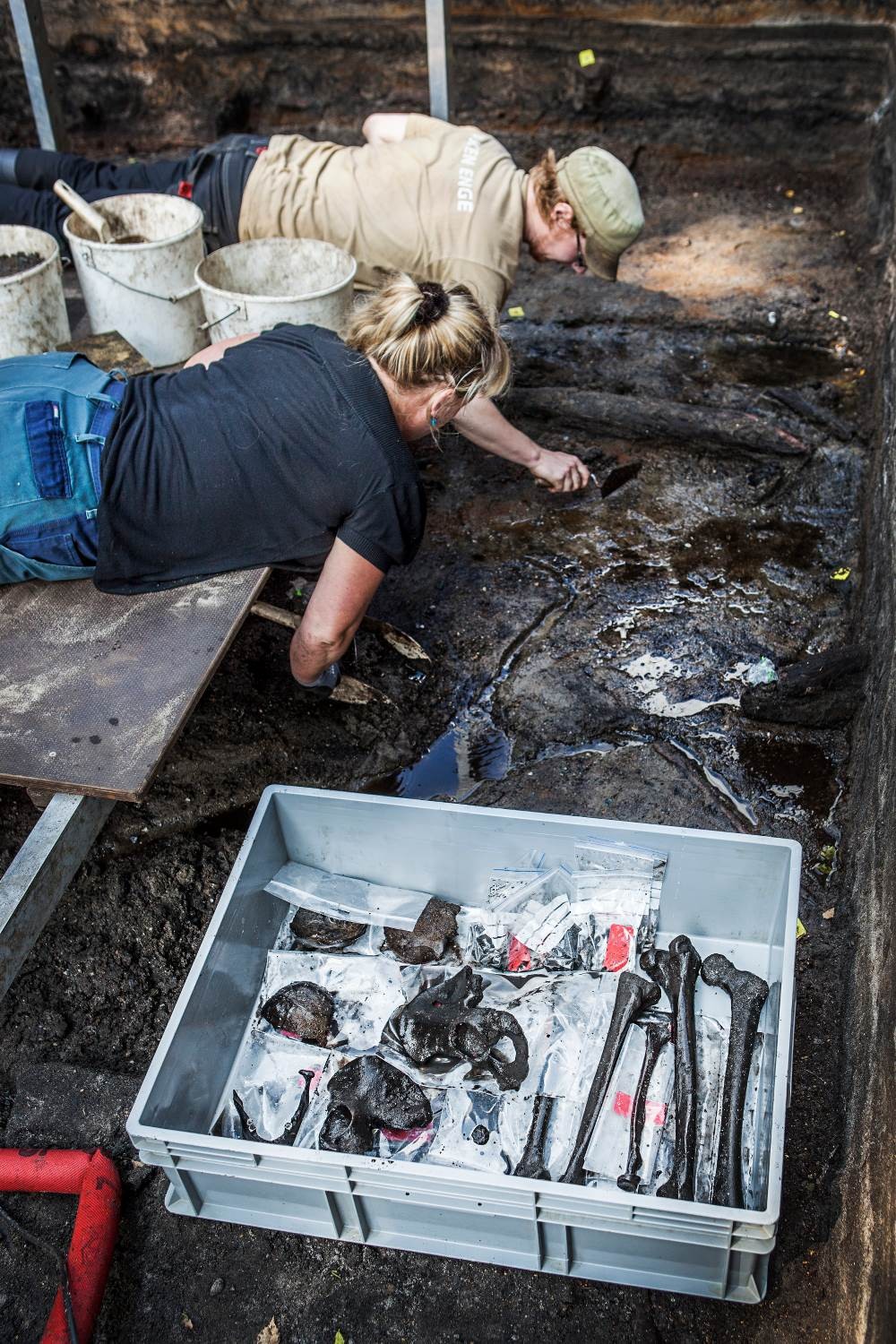 Situation of the excavation area with some of the human bone finds in the foreground and Ulla Ragne Berg Rasmussen and Anders Bonde Mørk in the background. Photo: Anders Trærup, AU Photo

The remains of the fallen were gathered together and all the flesh was cleaned from the bones, which were then sorted and brutally desecrated before being cast into the lake. The warriors’ bones are mixed with the remains of slaughtered animals and clay pots that probably contained food sacrifices.

“We are fairly sure that this was a religious act. It seems that this was a holy site for a pagan religion – a sacred grove – where the victorious conclusion of major battles was marked by the ritual presentation and destruction of the bones of the vanquished warriors,” adds Mads Kähler Holst.

Remains of corpses thrown in the lake

Geological studies have revealed that back in the Iron Age, the finds were thrown into the water from the end of a tongue of land that stretched out into Mossø lake, which was much larger back then than it is today.

“We generally find bones spread out across the beds of old lakes without any real context, but the new finds have suddenly given us a clear impression of what actually happened. This applies in particular to the four pelvic bones. They must have been threaded onto the stick after the flesh was cleaned from the skeletons,” explains Field Director Ejvind Hertz from Museum Skanderborg.

Archaeologists assume that the recent finds at the Alken dig stem from an internal conflict of this kind. Records kept by the Romans describe the macabre rituals practised by the Germanic peoples on the bodies of their vanquished enemies, but this is the first time that traces of an ancient holy site have been unearthed. 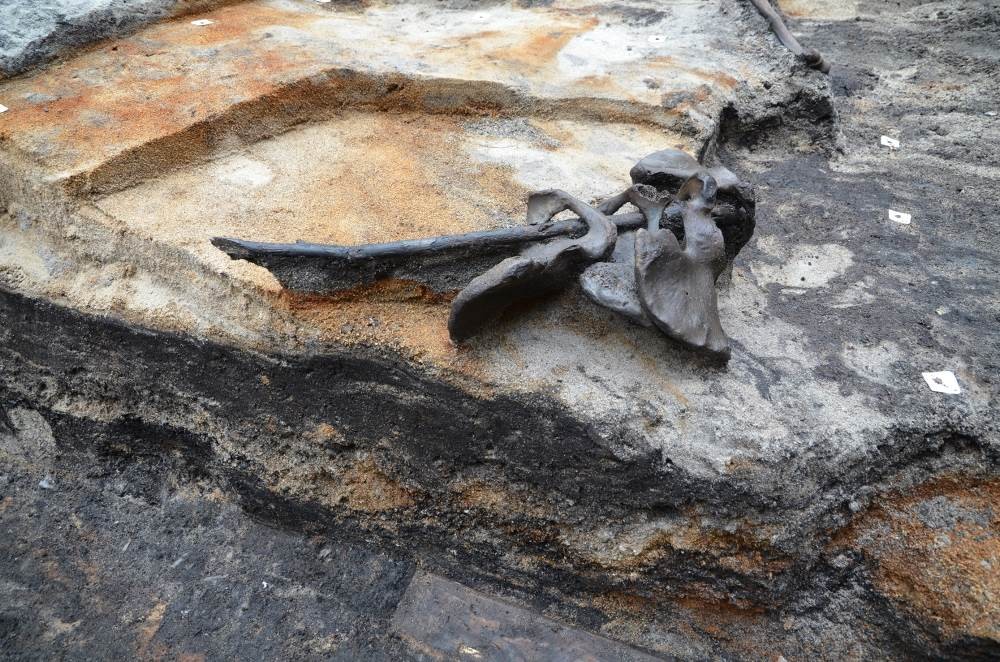 Visit the excavation and see the finds

The archaeological excavation at the Alken Enge site is set to continue until 8 August 2014. Guided tours of the dig for the general public will be held on Thursday, 31 July at 15.00 and 17.00. The tours start at Alkenvej 171, 8660 Skanderborg. The excavation will be open to the press on Wednesday 30 July 2014 from 10.00 to 15.30.
A number of finds from the excavation are currently on display at Museum Skanderborg, among the four pelvic on a stick.

The dig is being funded by the Carlsberg Foundation, which has supported the project entitled “The army and post-war rituals in the Iron Age: warriors sacrificed in the bog in the Alken Enge wetlands in the Illerup Ådal river valley” with grants totalling DKK 5 million.

Macabre finds in the bog at Alken Enge

A fractured skull and a thighbone hacked in half. Finds of damaged human bones along with axes, spears, clubs and shields confirm that the bog at Alken Enge was the site of violent conflict. 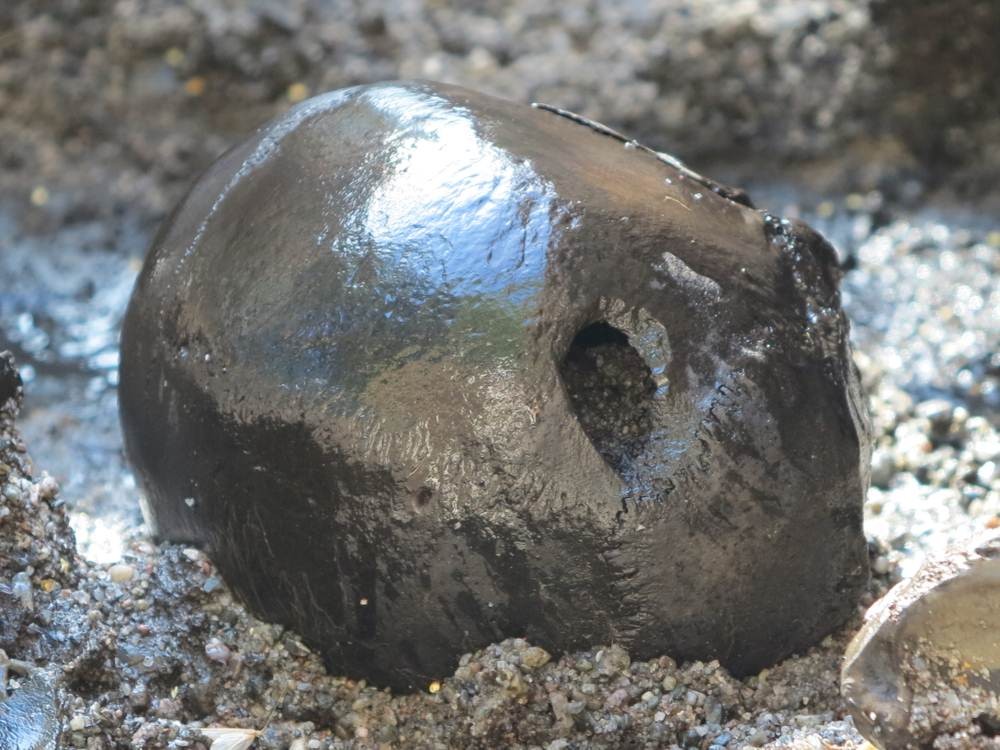 The first skull from the 2012 excavation with a fatal injury in the back of the head caused by a lance or an arrowhead. Foto: Ejvind Hertz, Skanderborg Museum.

'It's clear that this must have been a quite far-reaching and dramatic event that must have had profound effect on the society of the time,' explains Project Manager Mads Kähler Holst, professor of archaeology at Aarhus University.

For almost two months now, Dr Holst and a team of fifteen archaeologists and geologists have been working to excavate the remains of a large army that was sacrificed at the site around the time of the birth of Christ. The skeletal remains of hundreds of warriors lie buried in the Alken Enge wetlands near Lake Mossø in East Jutland, Denmark.

The remains will be exhumed from the excavation site over the coming days. Then an international team of researchers will attempt to discover who these warriors were and where they came from by performing detailed analyses of the remains. 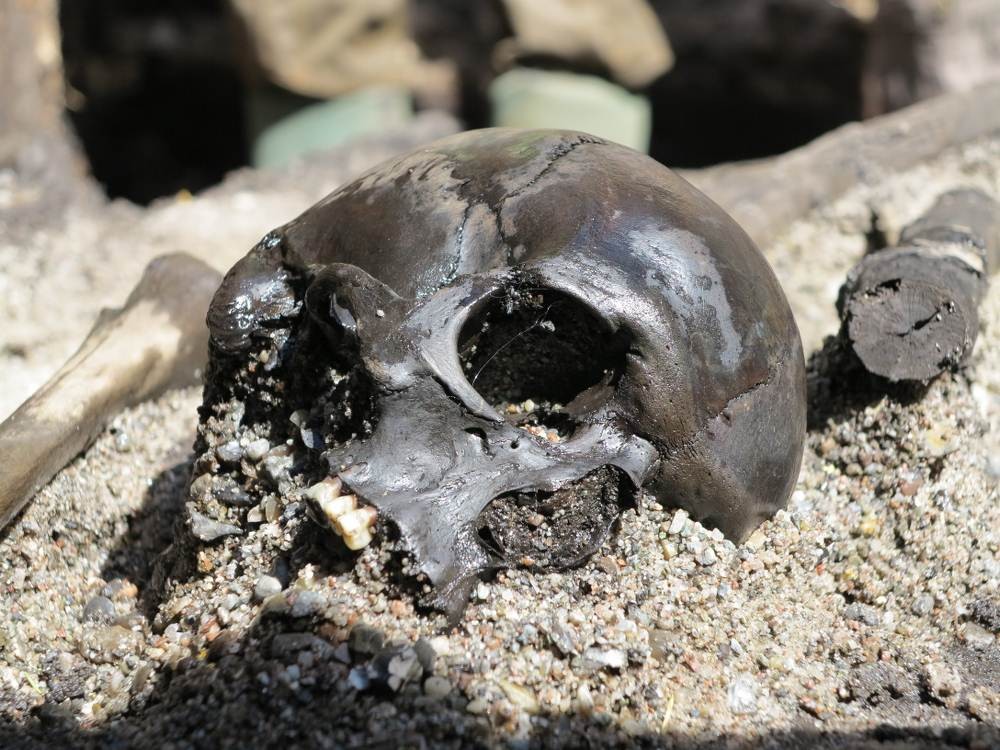 'The dig has produced a large quantity of skeletal remains, and we believe that they will give us the answers to some of our questions about what kind of events led up to the army ending up here,' explains Dr Holst.

The archaeological investigation of the site is nearing its conclusion for this year. But there are many indications that the find is much larger than the area archaeologists have excavated thus far.

In fact, the find is so massive that researchers aren't counting on being able to excavate all of it. Instead, they will focus on recreating the general outlines of the events that took place at the site by performing smaller digs at different spots across the bog and reconstructing what the landscape might have looked like at the time of the birth of Christ.

At the same time as the archaeological dig, geologists from the Department of Geoscience at AU have been investigating the development of the bog.

'The geological survey indicates that the archaeological finds were deposited in a lake at a point in time when there was a a smaller basin at the east end of Lake Mossø created by a tongue of land jutting into the lake,' explains Professor Bent Vad Odgaard, Aarhus University.

This smaller basin became the Alken Enge bog of today. The geologists' analyses also indicate that the water level in the area has changed several times. Mapping these periods of high and low water levels chronologically using geological techniques will tell researchers what the precise conditions were on the site at the time of the mass sacrifice.

The archaeological excavation at the Alken Enge site will continue until 23 August. There are guided tours for the general public on Thursdays at 13.00 and 17.00.

• The excavation is a cooperation between Skanderborg Museum, Moesgård Museum and Aarhus University.
• The project 'The army and post-war rituals in the Iron Age: warriors sacrificed in the bog in the Alken meadows in the Illerup river valley' is supported by a DKK 1.5m grant from the Carlsberg Foundation.

An entire army sacrificed in a bog

What exactly happened in the Danish village of Alken around the time of the birth of Christ? Who were the over two hundred victims, and what events led to such an enormous sacrifice?

Archaeologists and other experts from Skanderborg Museum, Moesgård Museum and Aarhus University hope to uncover the anwers to these questions this summer, when a major excavation takes place near Alken, a small town outside Skanderborg on the Jutland peninsula. A unique find was made here in 2009: the remains of an entire army which had been sacrificed in the bog. Archaeologists hope that the excavation will solve the many mysteries about the circumstances behind the sacrifice of several hundred warriors.

An archaeological treasure trove
The first spadefuls of earth in the major excavation in the meadows around Alken were dug on Monday. Earlier digs had already documented finds of skeletal remains from around two hundred individual warriors. And archaeologists are convinced that many more will be unearthed over the course of July and August. In the words of Aarhus University archaeologist Mads Kähler Holst,

'Last time we dug here, we didn't actually reach the perimeter of the finds, so we don’t know the extent of them. So there’ s no doubt that the dig will result in many more skeletons. If we are lucky, what we’ve already seen may just be the beginning,’ explains Dr Holst, associate professor of archaeology at Aarhus University.

Under the water table
The dig is taking place in damp grazing meadows near Jutland's large lake, the Mossø. To reach the remains, it's necessary to dig almost two meters below the water table of the Mossø.

´We are fighting against water seeping in, and we have big pumps running constantly. This makes our work difficult – but it also explains why the bones are so well-preserved. The water has delayed decomposition, which is why the remains are in such good condition when we dig them up,’ says Ejvind Hertz, Curator of Archaeology at Skanderborg Museum.

The major goal of the 2012 excavation is to learn more about the mass sacrifice of the warriors. Archaeologists hope analysing the remains will clarify some of the many mysteries associated with this unique find. Geological analyses will also be performed in an attempt to illuminate why the sacrifice took place precisely here, in the Alken meadows.

• The dig began on 2 July 2012 and will end on 24 August.
• Public guided tours will be offered on Thursdays at 13.00 and 17.00 from 5 July to 9 August 2012.
• The project 'The army and post-war rituals in the Iron Age: warriors sacrificed in the bog in the Alken meadows in the Illerup river valley' is supported by a DKK 1.5m grant from the Carlsberg Foundation

After a very exciting excavation in the summer of 2009 near Vædebro in Alken Wetlands, the Carlsberg Foundation has granted 1.5 million DKK for further research and excavations in Alken Wetlands. The meadows are located where Illerup River flows into Lake Mossø. The lake area was greater (approx. 600 x 600 m) around year 0 when it was the scene of a great sacrificial event. What archaeologists discover today under approx. 2 meters of peat are human bones lying on the old lake bed as single scattered bones and not as whole skeletons.
The discoveries at Alken Wetlands is unique in an international context. No other discovery has been made of such a great quantity of sacrificed warriors from around year 0. This opens up a unique opportunity to gain an insight into who the people were that were part of an army at this point in time, and the fate they suffered after a defeat.
The grant from the Carlsberg Foundation makes it possible to initiate a new large scale excavation in Alken Wetlands and analyse the finds and the countryside. Together, they will hopefully help to clarify the many questions that we have; Where does the defeated army come from? Why did they just end up in Alken Wetlands? Can the anthropological analysis help to clarify the circumstances of the warriors fate from when they were killed in war till they were sacrificed in Alken Wetlands? Is it possible to find usable DNA in the bones? How did the landscape look at the time and how were the sacrifices conducted? How much do the contemporary Roman sources tell us about Germanic warlords and their ritual practices related to warfare?
The project is a collaboration between Skanderborg Museum and Aarhus University, Department of Prehistoric Archaeology.
The stage is set for a large interdisciplinary collaboration involving both national and international partners. Efforts will be focused on documenting social conditions and bring the research to a point where it can provide the basis for funds applications for further research in the coming years. During the summer of 2012 we will issue another press release in connection with the archaeological investigations.