The 2014 excavations at Alken Wetlands lasted from July 7th to August 15th and involved, by and large, the same team as the previous years. In order to obtain a clearer image of the spit formations that are integral to our understanding and interpretation of the sacrifices at the site, the 2014 main survey was carried out south of the channel that bisects the area. 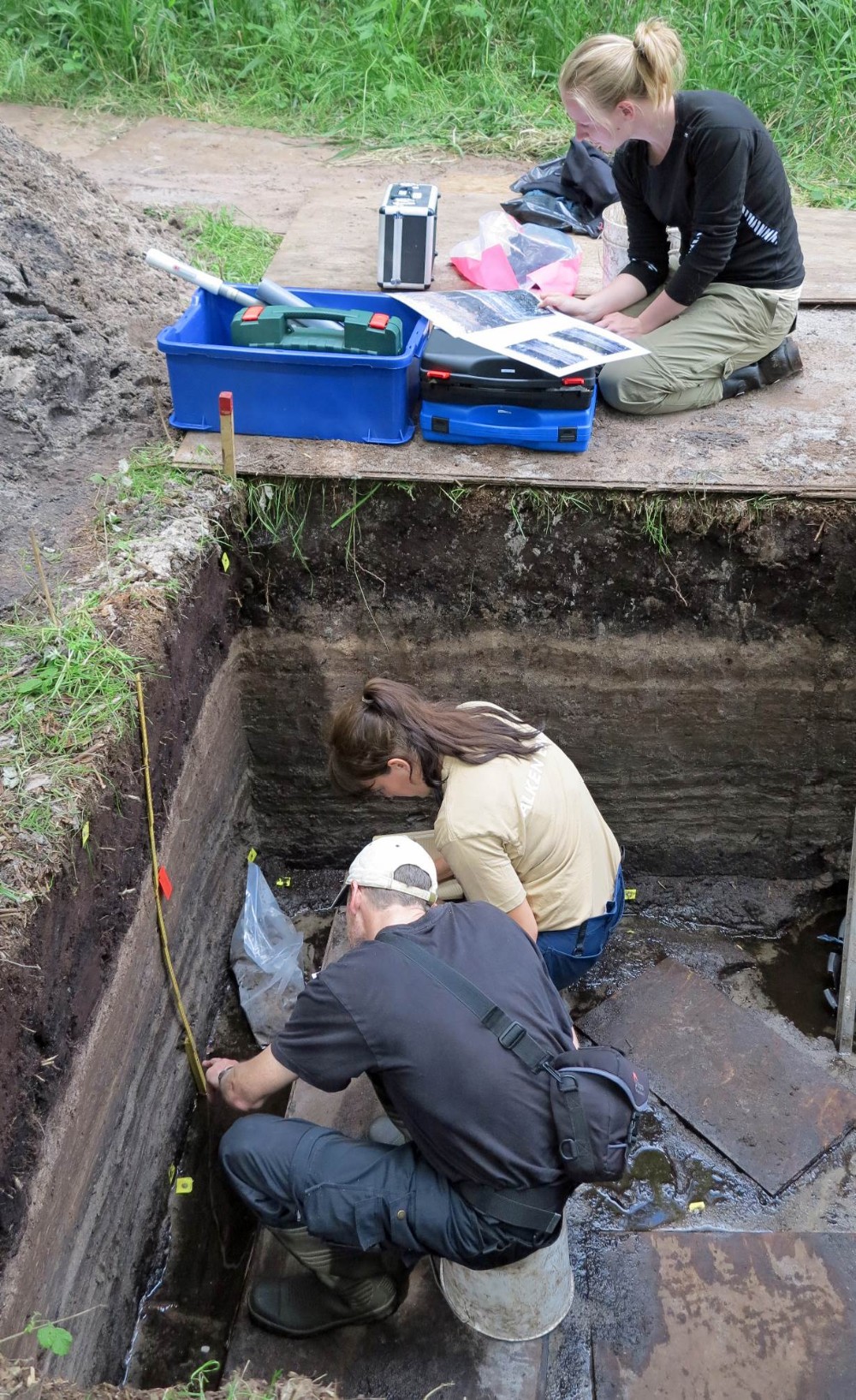 Taking samples in a testpit

5 test pits, each measuring 4 m2, were dug in order to find the optimal site for the main excavation; that is the area containing most skeletal remains as well as prime geological information.

As a result, the main trench, measuring 6x24 m, was laid out between the two spits. Once again, the picture that emerged was of scattered bones, however the finds distribution differed somewhat. There were numerous large bones, pelvic bones, shoulder blades but only fragments of skulls and two lower jaws. To our surprise, the 2014 main trench also contained large quantities of minor bones from hands and feet, spinal column as well as numerous fragmented bones. The ratio between large and small bones is still far from representational for a total individual and the smaller bones are still clearly in minority. 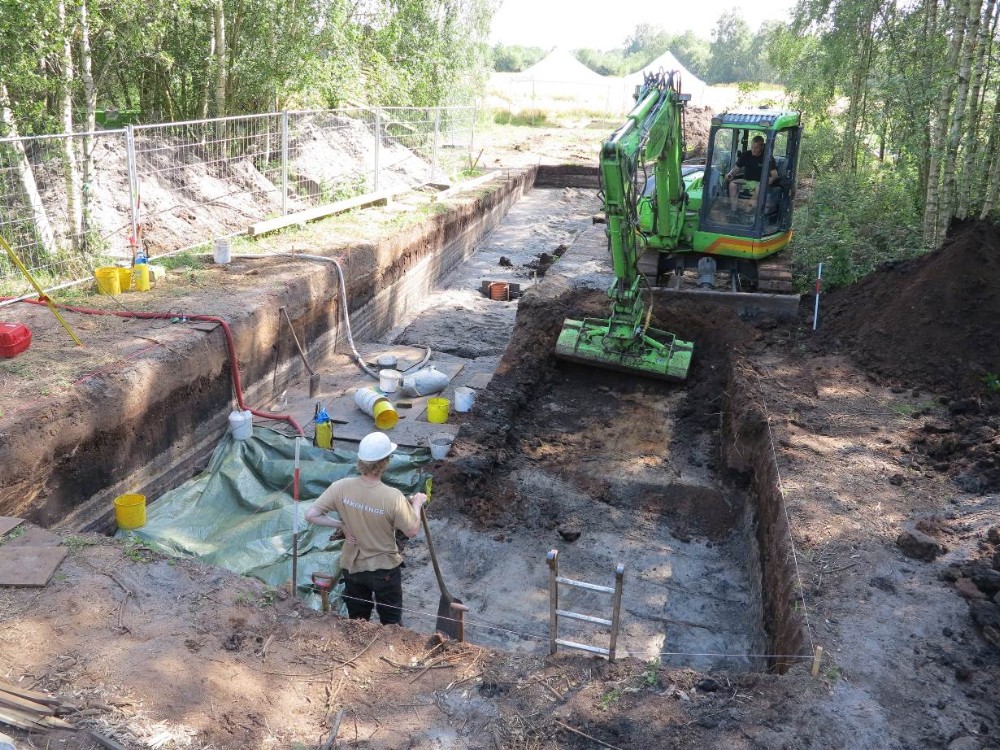 The new excavation site facing the east. The excavator is digging down to the finding layer

At the time of the sacrifice, both land spits had been somewhat submerged and the area in between had been some 2-3 meters underwater. While preservation conditions were excellent in the most submerged areas, they grew progressively worse towards the top of the land spits.

This year’s only lance head

Again in 2014 a number of pottery shards were found as well as a few wooden artefacts, such as a spade re-worked into a club-like object and also an iron lance point and relatively few animal bones. 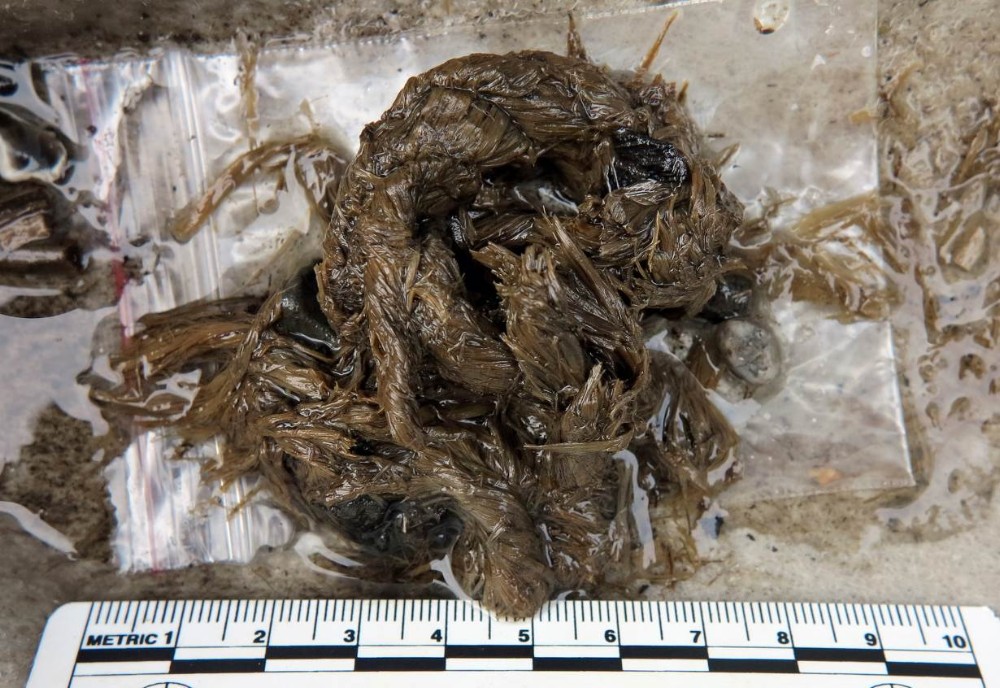 A piece of rope from linden bark 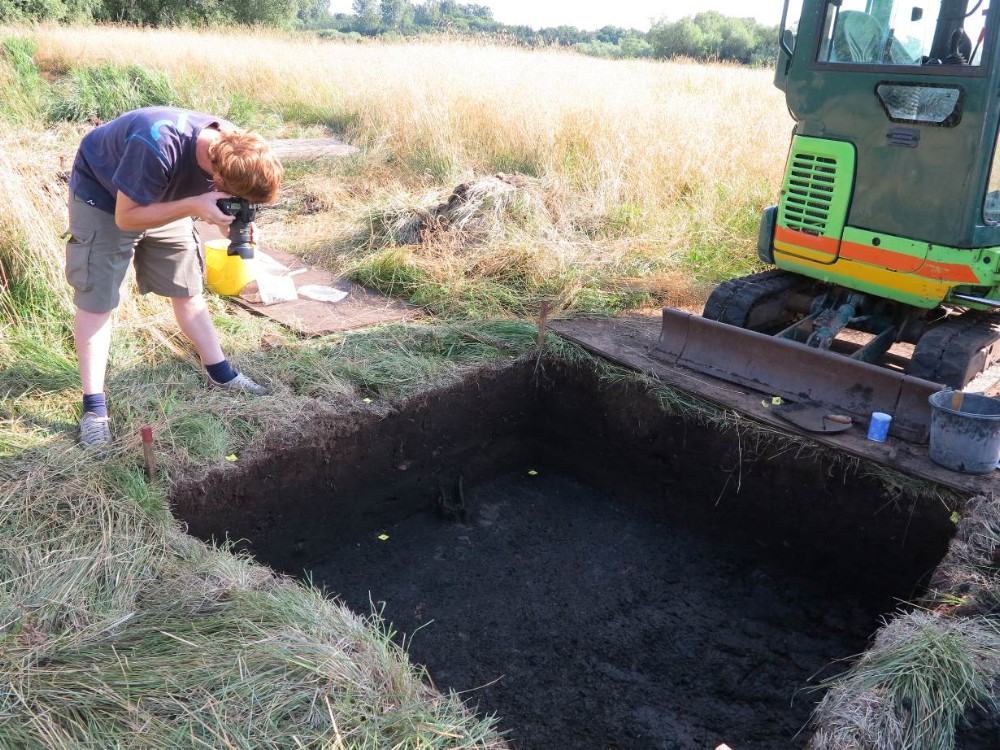 Testpit with a few bones

Testpits on the rear Spit

In addition to the main excavation area, 13 test pits measuring 2x2 m were dug east of the main trench. The aim was to map the extent of skeletal material as well as to investigate the rear land spit. Bones occurred in half of the trenches and another 3 test pits were dug on the site of Alken Wetlands. None of the last three test pits contained human remains.

This year’s excavation gave a great rush to four public tours and additional special tours. About 950 people attended the excavation and heard the complete story about the army’s destiny in Alken Enge. The students of archaeology from the University of Aarhus were particularly stunned when Morten Valdorff Rasmussen showed bones and told how the tracks on bones revealed the warriors’ histories.

The field from 2014 facing to the east. The deepest part in the front, gradually rising towards the east in the back. 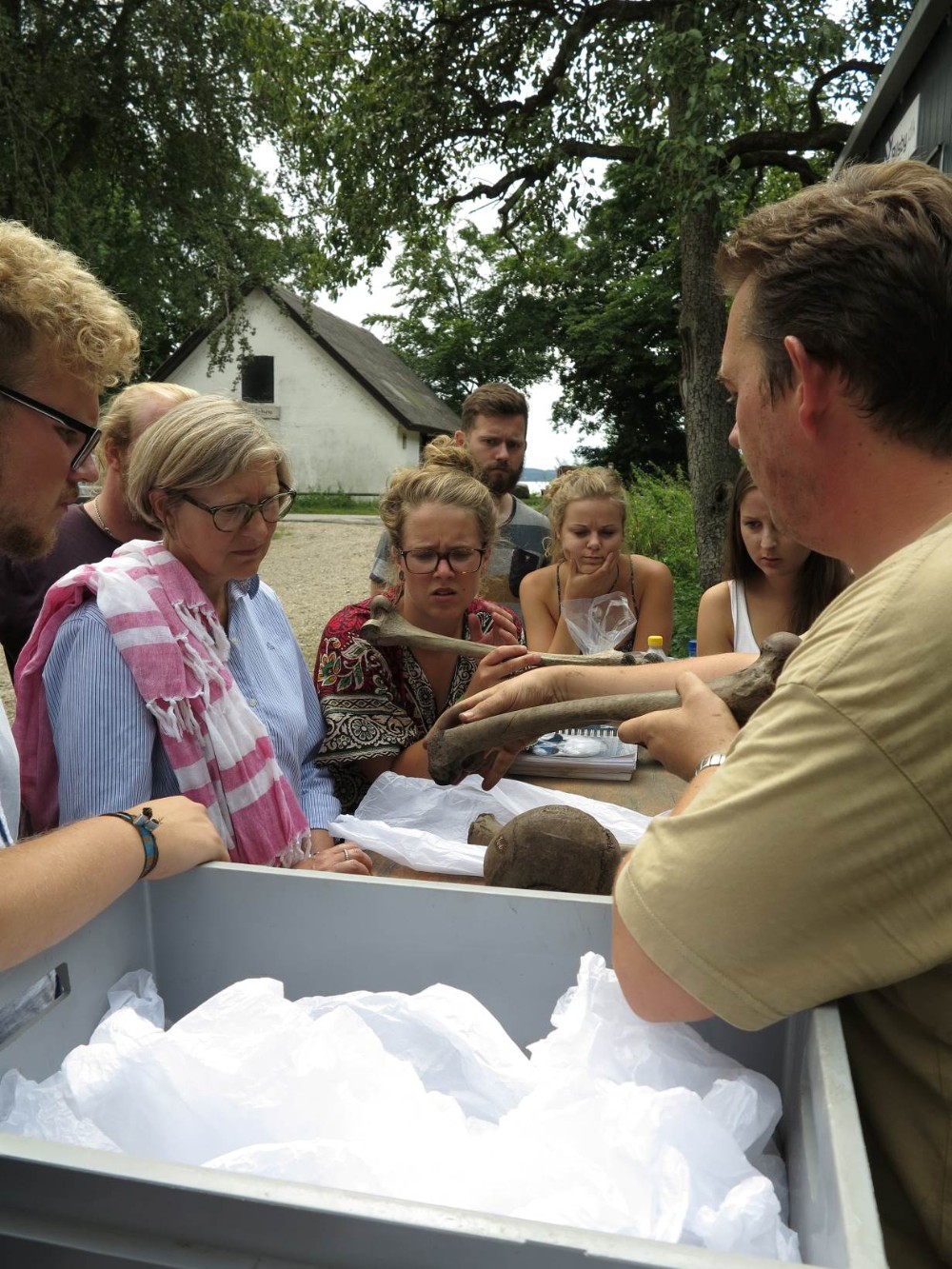 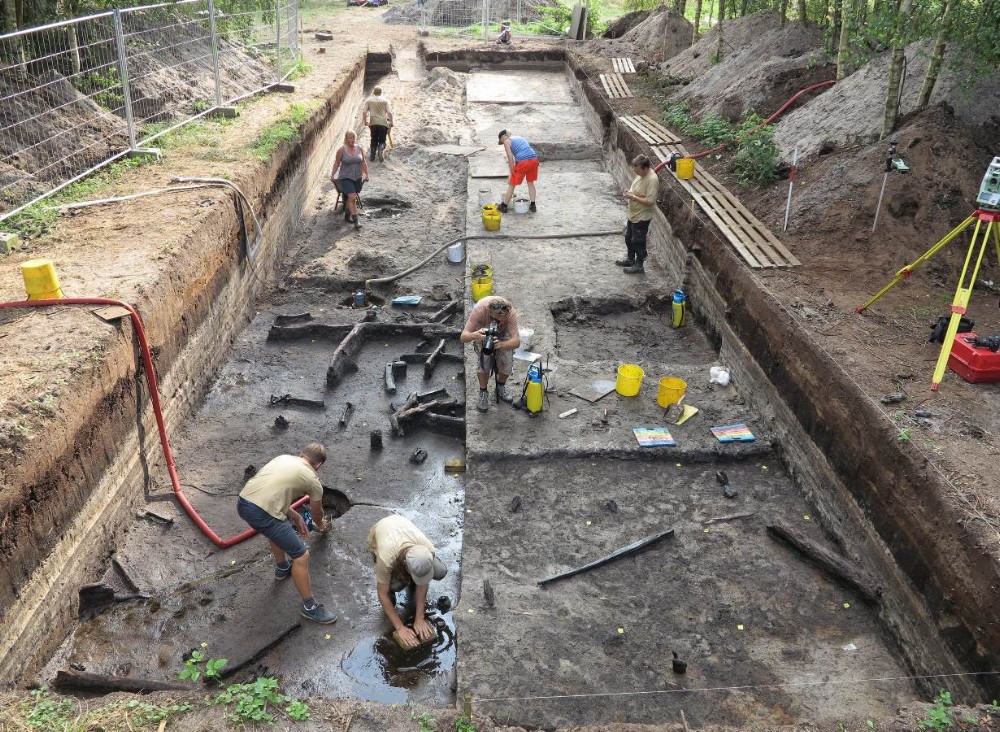 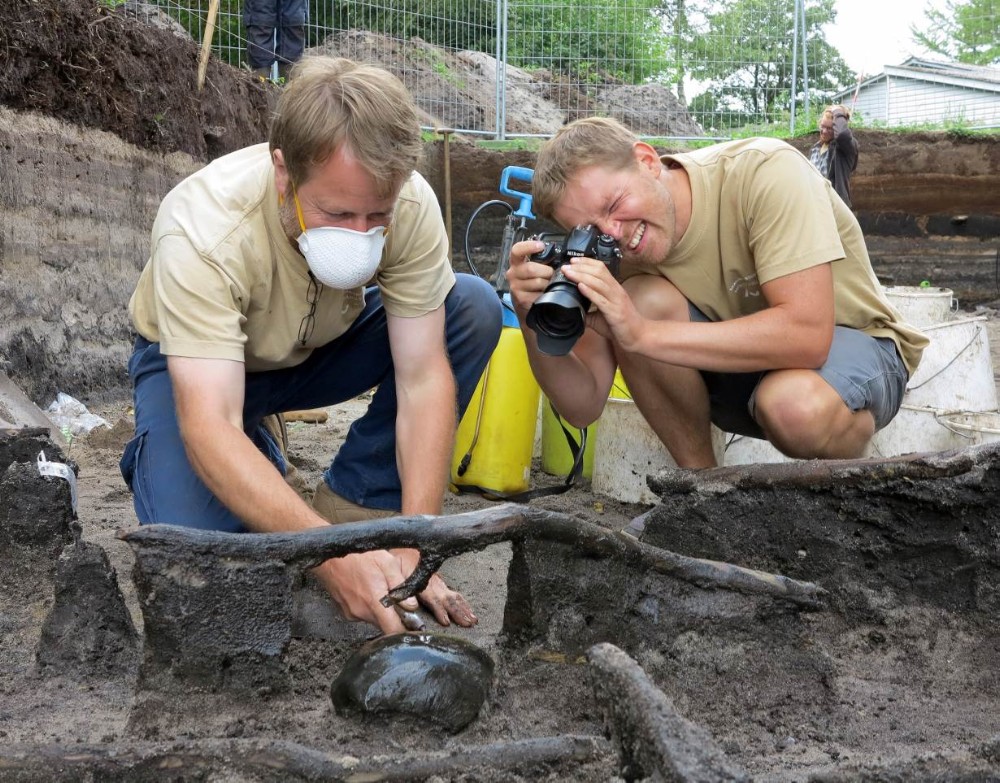 Documentation of a skull cap