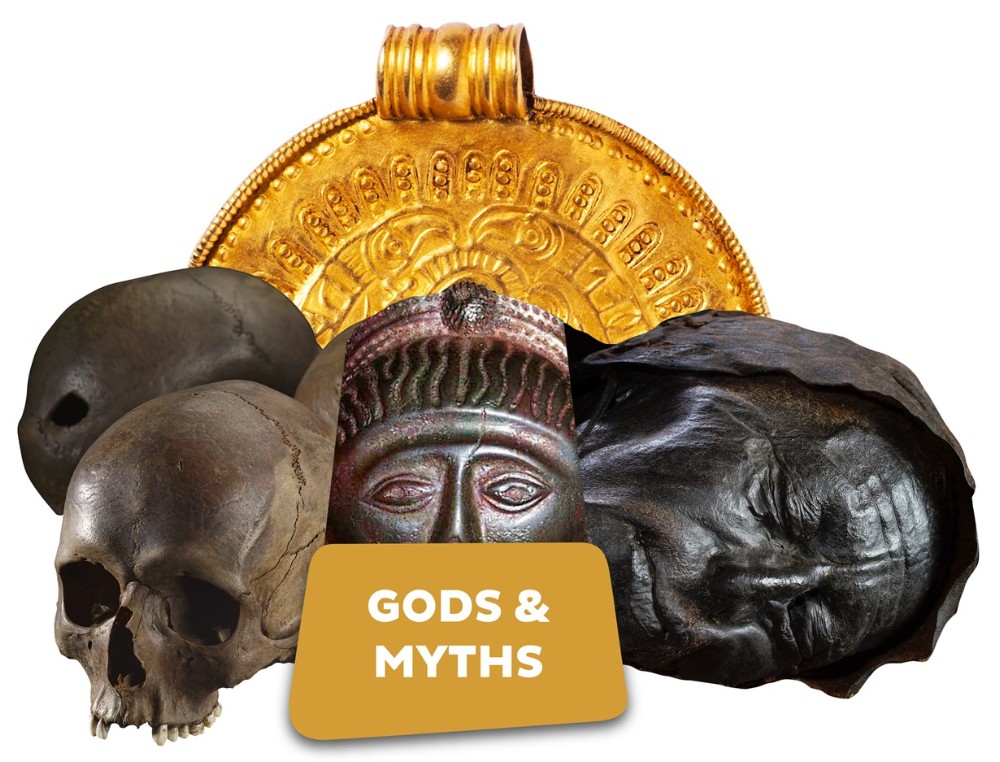 Museum Skanderborg consists of as many as five museums all inviting you to take a trip to some of the Skanderborg area's places of special interest. Places with fascinating, dramatic, or terrifying stories to tell. Try standing on the edge of the Illerup river valley, imagining the brutal sacrifices during the Iron Age 2,000 years ago. Stroll through the king's church in Skanderborg and feel the grandeur of the place, or look the mask on the runic stone in the eyes – the very stone erected by Frøsten the Viking in memory of his friend Gyrd. Go there, and feel the powerful beat of the wings of history! 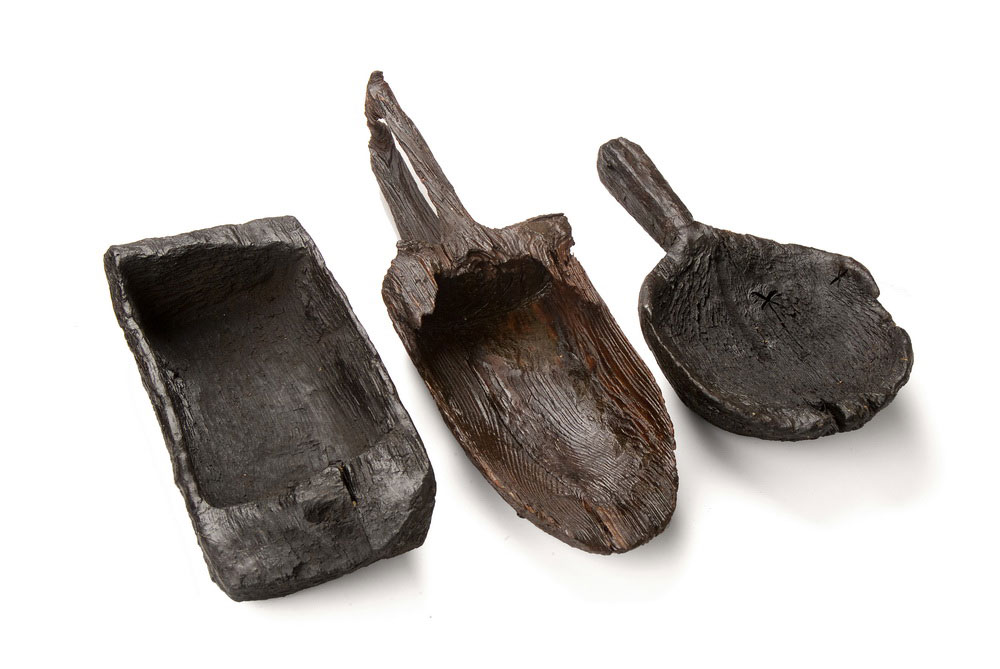 The holy well at Skvæt Mølle

The sun is setting. A caravan of wagons and people are headed for the well. All full of the hope of regaining their health after drinking the healing water from the well. Visiting a well involves certain rituals. It must be in the evening of Midsummer’s Eve or Walpurgis night. The water must be drunk or poured on bad limbs in silence. Vessels and ladles used must be disposed of and never used again.
This scene was played out by the holy well at Skvæt Mølle in the 18th century. The belief in the healing powers of the well dates back to medieval times, and this holy well was used until the mid-19th century. 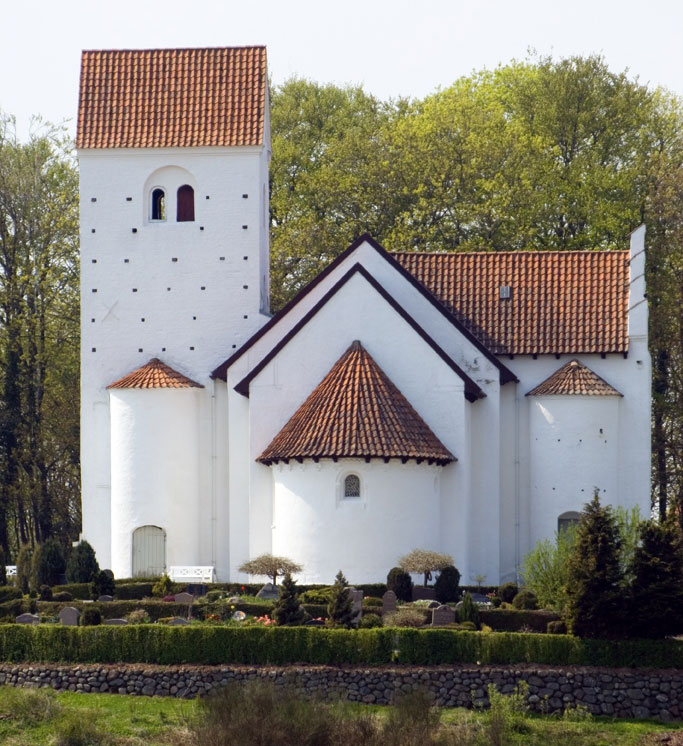 If ancient walls could speak, they would tell stories of the monks' troubles with Lady Margrethe. She forcefully robbed the monks of a magnificent golden chasuble og scared them into leaving the monastery. The abbey, gazing augustly over the landscape, was originally built as an abbey church for the Benedictine monks, or black monks, around the year 1100. Later in time the monastery was taken over by Cistercian monks, the white monks. The Cistercians were the ones who were scared away from the monastery in 1168, never to return. The church building is Denmark's oldest abbey church still standing and an architectural attraction in a class of its own. 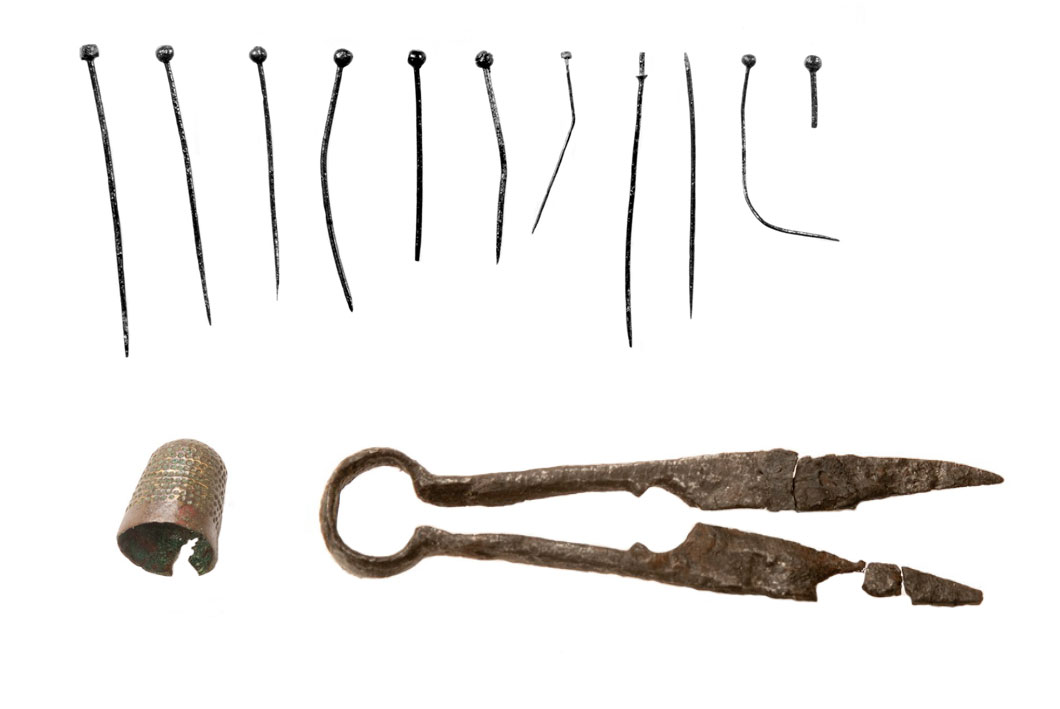 ”A tragic parting” is how Mette Ovesdatter, nun and schoolmistress at Ring Abbey, describes the parting with two of the children of the nobility who studied at the nunnery school. These words she wrote in 1529 in a letter to the parents. At the nunnery school, the girl, Karen Lykkesdatter, learned sewing and embroidery while the boy, Peder Bille, learned to read and write. There are no remains above ground of the abbey, but at the location there are still farm buildings which were part of a later manor; a majestic timber-framed barn and the large byre of the manor dating back to the 19th century. Both buildings stand where the abbey used to be. 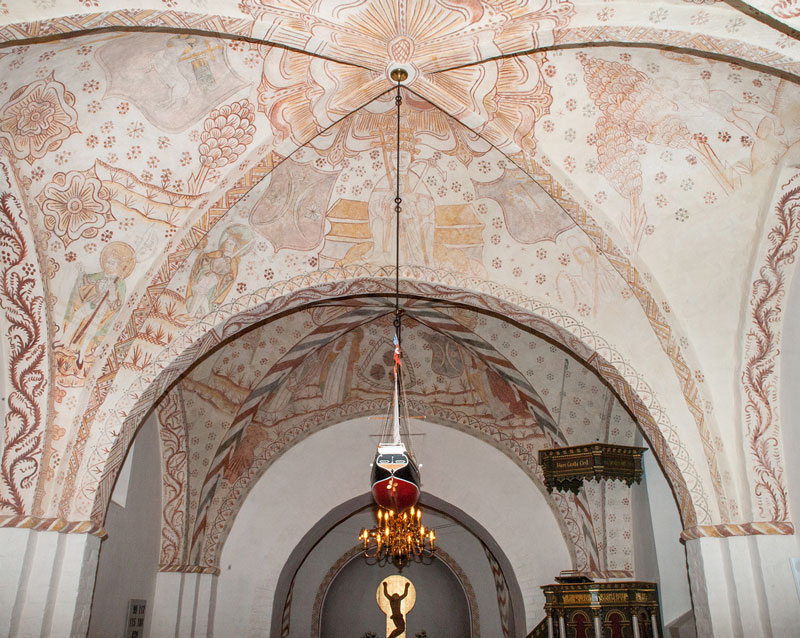 An abundance of colourful pictures meets the eye when you step into the church. In particular the frescos from 1503 are fabulous and fill almost every spot inside the church. Here is the Nativity and the Passion, the Fall, and the Expulsion from Paradise. Furthest to the west are painted smaller-sized sacred images with geese hanging a fox from the gallows, a pig playing the bagpipes, and grotesque masks. The coats-of-arms of two Aarhus bishops and the patron Saint Clement of the diocese are painted on the church walls bearing witness to a close relationship between Skivholme and the Aarhus bishop and cathedral in the Middle Ages. 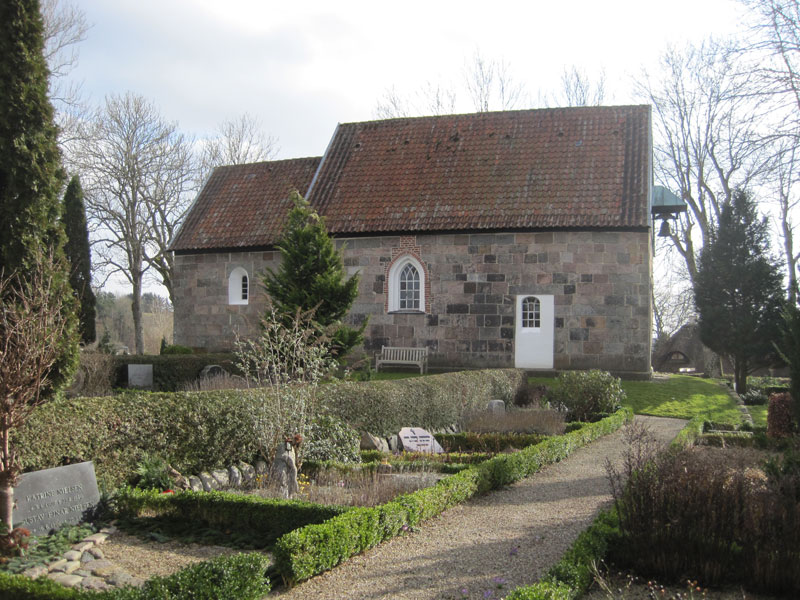 Despite its very modest size, the church in Alling is steeped in history. Inside the church are fittings preserved from the period shortly before the Reformation. On the wall is a Lutheran triptych with the original communion inscription, and underneath the present-day pews are still the original bench planks. The altarpiece and benches both date back to the 16th century. In the porch is the tombstone for Court chef S H C Glahn who died in 1757. Glahn cooked for as many as four kings; Christian V, Frederick IV, Christian VI, and Frederick V. The court chef was buried in the church where his son, Adam Glahn, served as the church vicar. 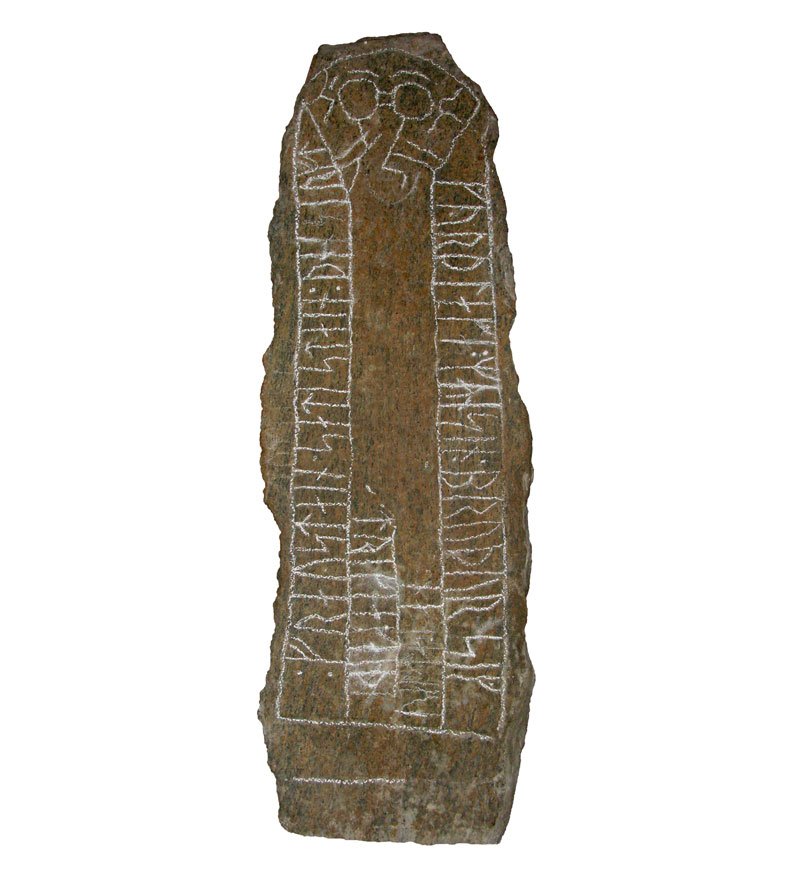 ”Frøsten placed this stone in memory of Gyrd, his comrade, Sigvalde's brother”. Those are the opening words of the inscription on the runic stone from Sjelle. The remaining part of the inscription cannot be deciphered. This stone is one the few Danish runic stones which in addition to the runic ribbon is also adorned with a mask. The mask has distinctly large round eyes and thick bearded locks. The stone dates back to the early Viking Age approx. 975–1025. The monument for Gyrd the Viking was originally painted in highly vivid colours making the runic ribbon and the mask clearly visible from afar. The original location of the stone remains unknown, but ever since the 16th century it has been standing by the church in Sjelle. 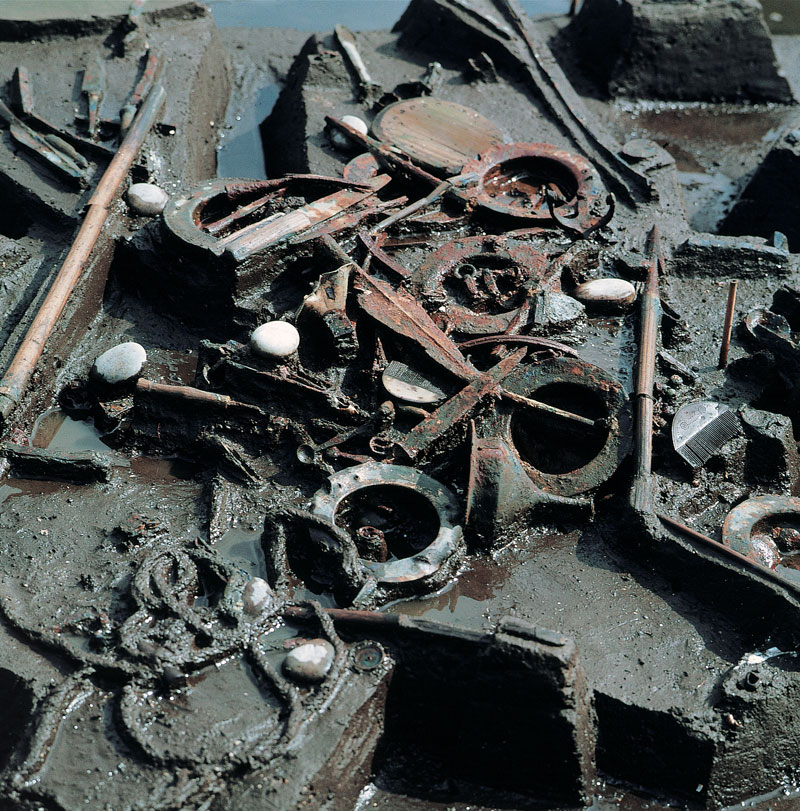 A large fleet is heading down the Kattegat. Swarta and one thousand other warriors aboard 50 ships are on their way. Beacons are lit, and the local population prepare for the inevitable battle. The time is around 200 AD, and we have knowledge of this battle because the spoils were later found in a lake in Illerup. All the enemy's weapons and personal items were systematically destroyed, bundled together, boated out and thrown into the lake. On four occasions during 200–500 AD caches of weapons were deposited in the lake. This lake was chosen, because the entire river valley was a sacred place during the Iron Age. 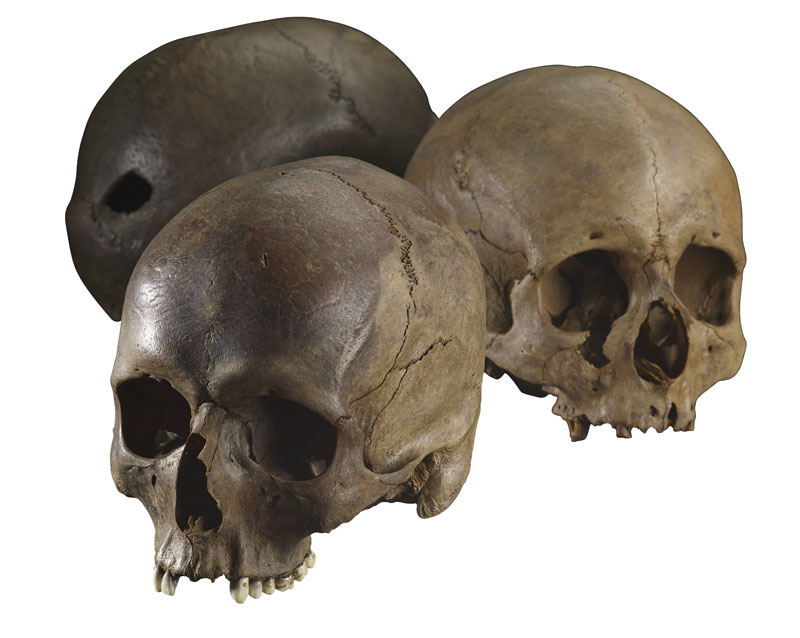 The iron-age army in Alken Enge

In the boggy meadows behind the holiday homes at Alken, is the scene where a dramatic, terrifying, and fascinating history unfolded. Underground in the peat soil lie human bones dating back to around the birth of Christ. At the time a battle took place in East Jutland. The exact location is unknown, but the slain warriors from a defeated army were left on the ground until their bodies were no more than bones. The bones were then gathered together and transported to Alken where they were placed in a lake which today has now become a boggy meadow. 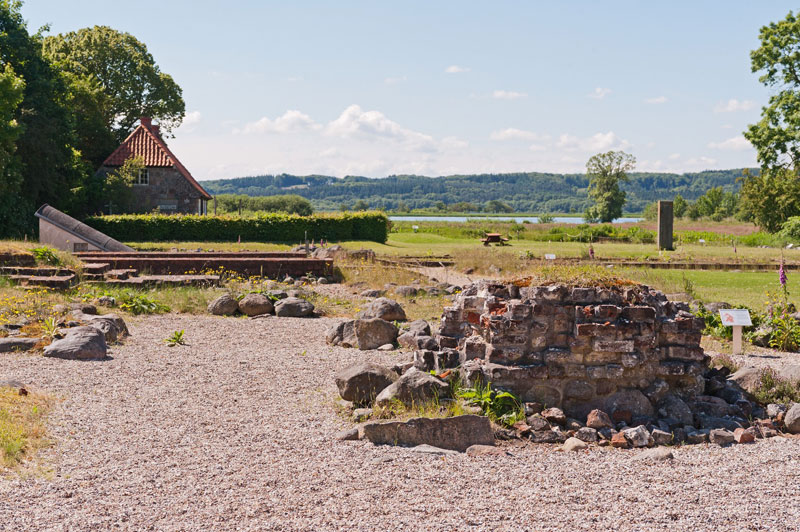 On a spring day in 1172 a group of monks arrived at a sand spit between the lakes of Mossø and Gudensø. Martin the monk used a plummet to measure the depth of the lakes and the height of the landscape between the lakes. He found a height difference sufficient for the abbey to construct a water supply by digging channels between the lakes. The monks named the place Cara Insula, Latin for ”Beloved island”. Because of the channels the abbey had become situated on an island, at the same time providing the monks with clean water for drinking and flushing toilets. Today the ruins of the monastery, together with a museum, graves, and a monastery garden, can be visited on the bank of the Mossø lake. 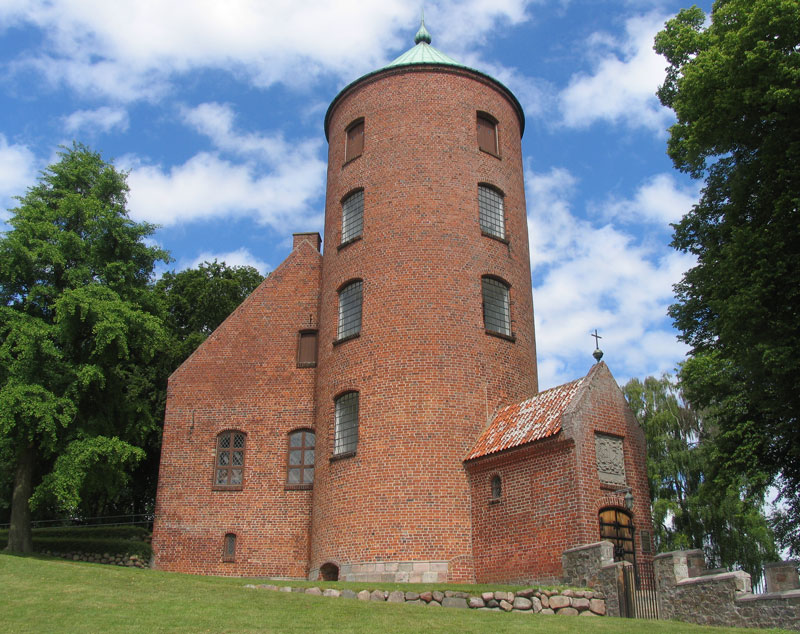 ”Today I went with my Sofie and all my children to Skanderborg”. Thus writes King Frederick II in his calendar on 9th April 1583. King Frederick and Queen Sofie together with their seven children frequently stayed at the royal palace. Originally Skanderborg was a medieval castle, built in the 12th century as one Jutland's most important royal castles. The castle was situated at an important strategic junction point from where they could keep an eye out for traffic between Horsens and Aarhus. The palace was demolished, but today the palace hill and palace church remain, once reserved purely for the royal family, but which can now be visited by the public.